sUAS and the 1 October Tragedy

“1 October, Harvest Festival, Route 91” are all synonymous to Nevadans and first responders, marking the America’s worst-yet mass shooting event when a lone gunman in a high-rise hotel opened fire on concert goers (the official investigatory title for this event is “1 October”).

Over the course of several hours following the shooting;  law enforcement, fire, EMS services, and civilians acted as one to manage the scene, transporting victims to local hospitals, secure the area, and begin collection of evidence.

sUAS were a component of the evidence-gathering process under the direction of the FBI and Las Vegas Metropolitan Police Department (LVMPD). 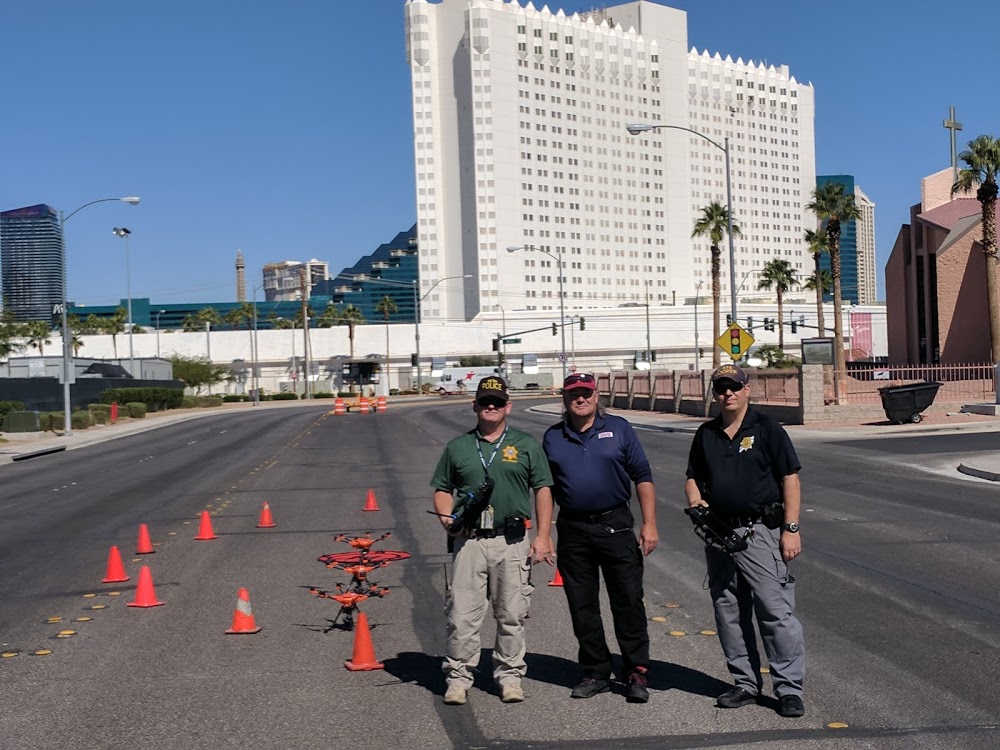 LVMPD partnered with Nevada Highway Patrol’s Multidisciplinary Investigation and Reconstruction Team and their sUAS as part of the scene given the size of the site, and the amount of data that needed to be collected in a short period of time. An outside technical advisor was also brought in to advise and as a subject matter expert to ensure automated mission compliance and best-practices were observed in each of the missions.

The area to be captured via sUAS was just over 19 acres in overall size.

To combat the second issue, altitudes for flight were selected based on height and downdraft from the aircraft.

Two types of aircraft were evaluated, a quadcopter and a hexacopter. The hexacopter offered significantly less ground disturbance and was selected for the mission. It was also much quieter and was expected to not attract undue attention at any altitude, as there were many tourists along Las Vegas Boulevard.

In order to counter the primary issue it was determined that the area would be captured with three simultaneous flights, spatially and temporally separated. 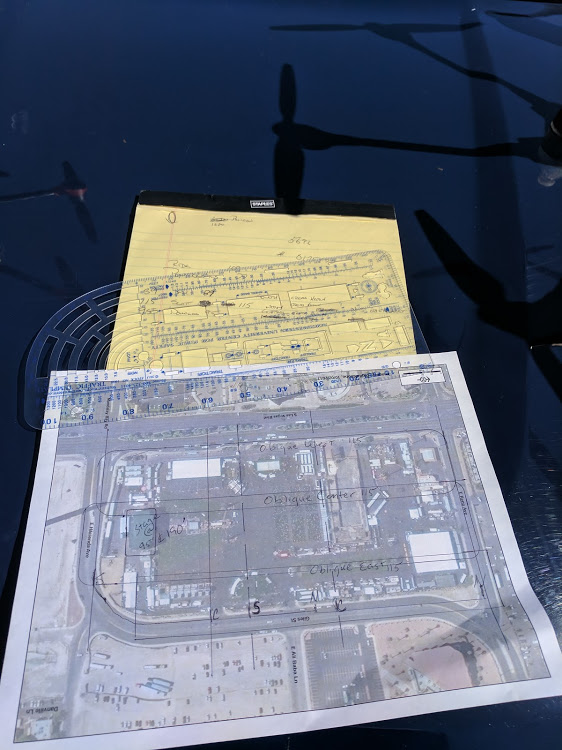 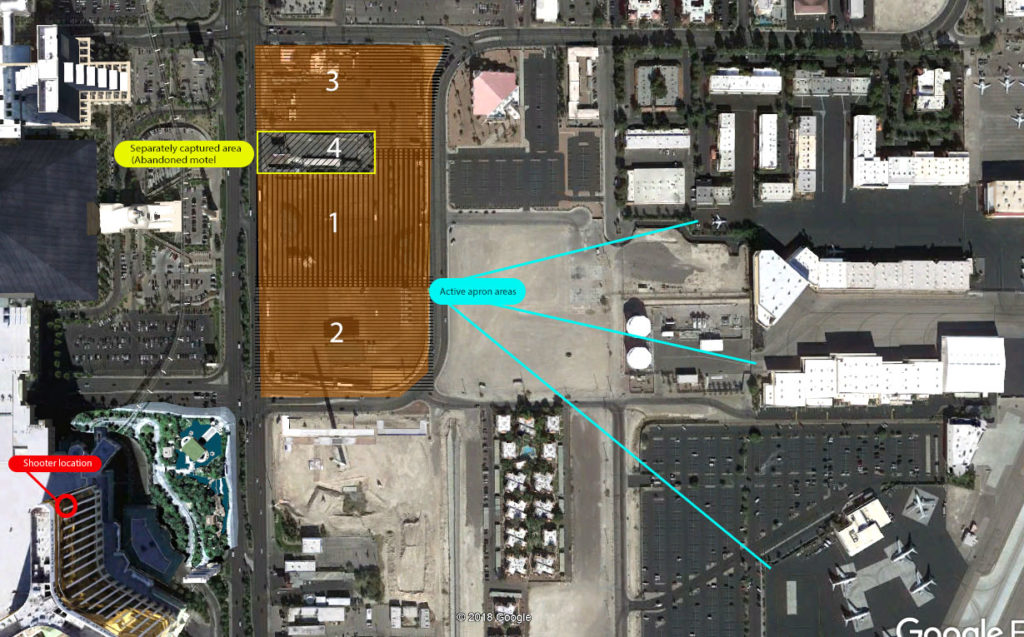 Plans for automated flight were discussed on-site with time of flight determined by angle of sun. Once plans were determined and drawn, FBI and LVMPD personnel approved the automated flight areas, altitudes, and speed of flight. The automated, map-mission flight paths were programmed into each of the three ground stations, and verified by all authorized parties.

Flight plans included 85% overlap, 70% sidelap, with 25% additional area beyond the festival grounds captured for clean edges at the optical extremes.

Road closures surrounding the crime scene provided a secure area for launch/recovery of aircraft with no traffic in the area, providing for VLOS over the 19 acre property.

Once safety checks and the normal pre-flight checks were completed, the aircraft were placed in the launch/recovery area and three aircraft were launched eight minutes apart.

During flight, the ground station controller provided real-time feedback indicating where images have been captured. 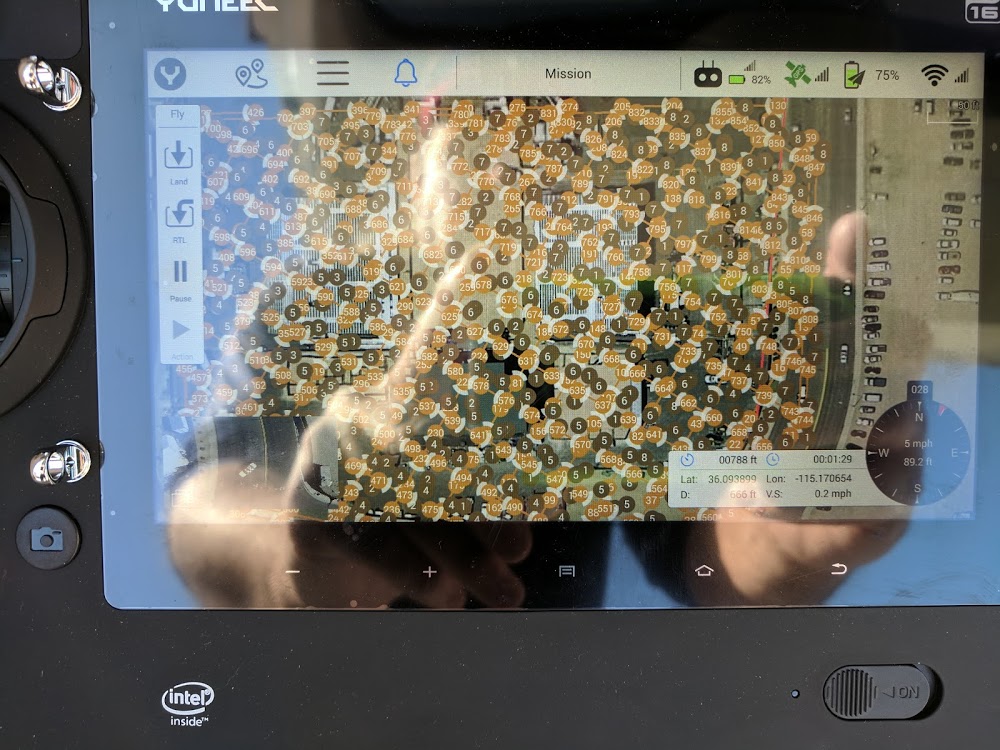 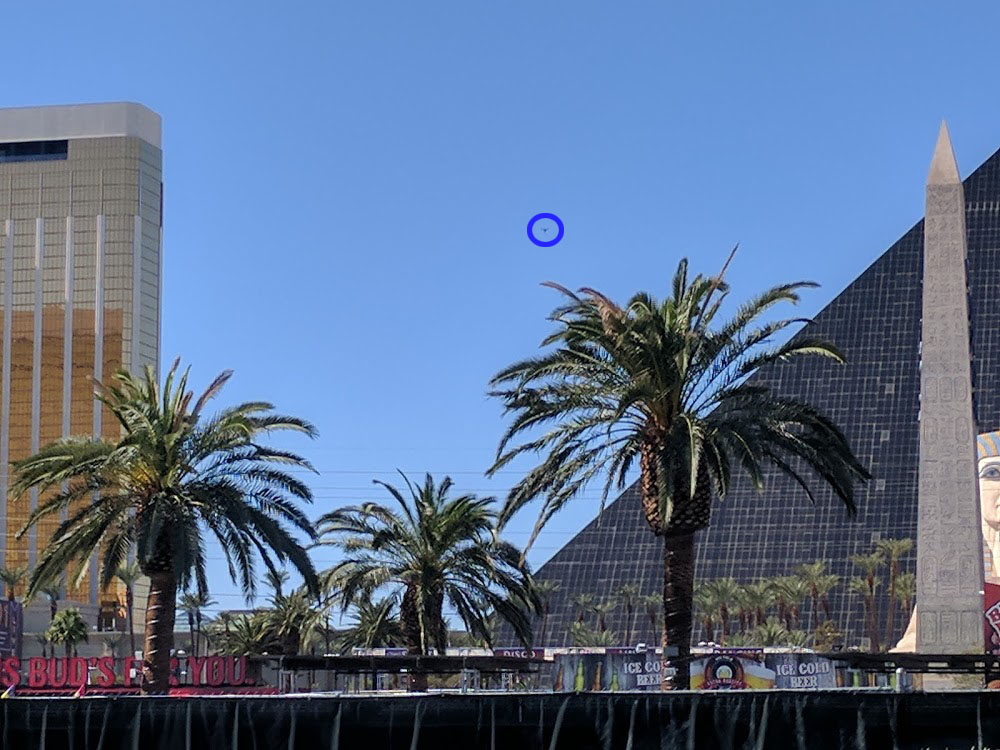 Donning sterile suits required to enter the perimeter of the crime scene allowed for manual flight in specific areas where closer inspection of complicated surfaces were required. Manual flights inside the area perimeter provided insights not visible from the ground level. Examples of projectile impact were found on a power pole at the intersection of two streets, and two impact points were discovered in the relay tower speakers that had not previously been found. 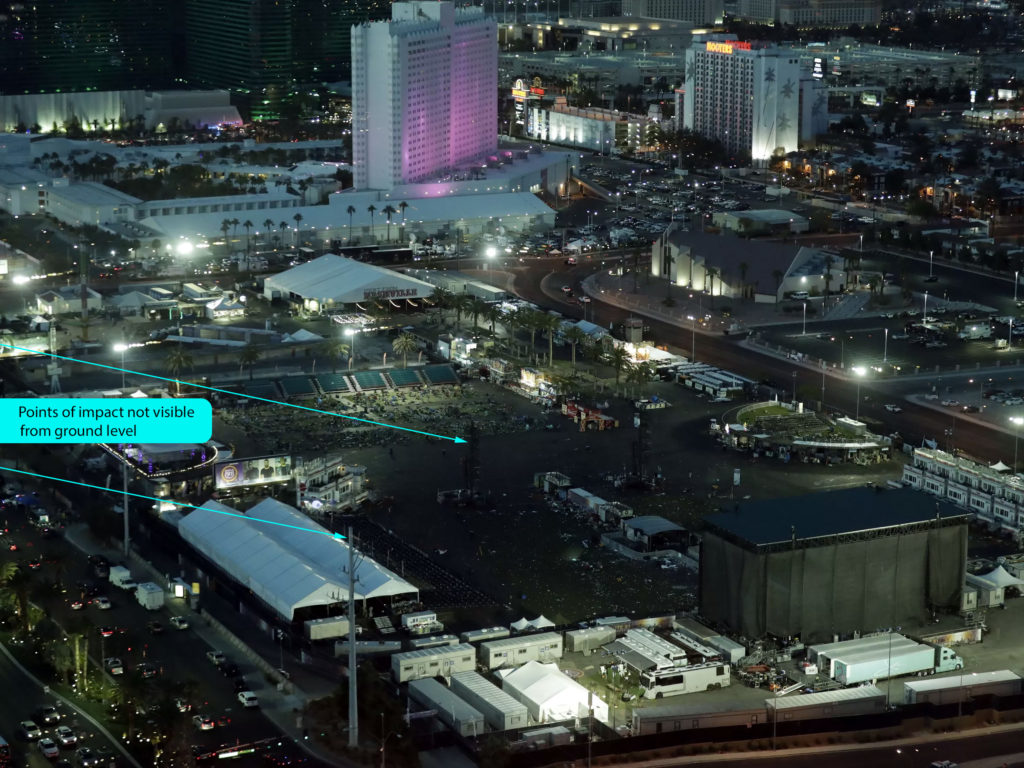 These areas were complicated for UAS flight, crossed with guy wires for tower stability, speaker cables strung across steel rigging, lighting instruments, hot, black metal in turbulent winds in areas where three observers were placed to assist the pilot in flying in these tight, physically and optically challenging spaces around the stage, speaker towers, food court/tents, billboard signage, and fence perimeters. 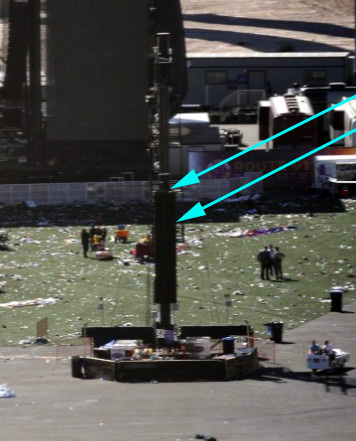 Following the nine flights (3×3) over the main grounds, a separate mission was executed over the abandoned hotel that extends into the entertainment property. These missions were a combination of manual inspection when potential evidence was observed, and automated mapping flights to capture the at-present data. In this particular instance, the benefits of the hexacopter were appreciated; turbulent ground winds, rotors, powerlines, palm trees, a confined area, and limited physical access each contributed to the challenges of this series of missions. VLOS was maintained with the observer standing on the rear of a patrol vehicle due to a high, covered fence and a limited launch area. 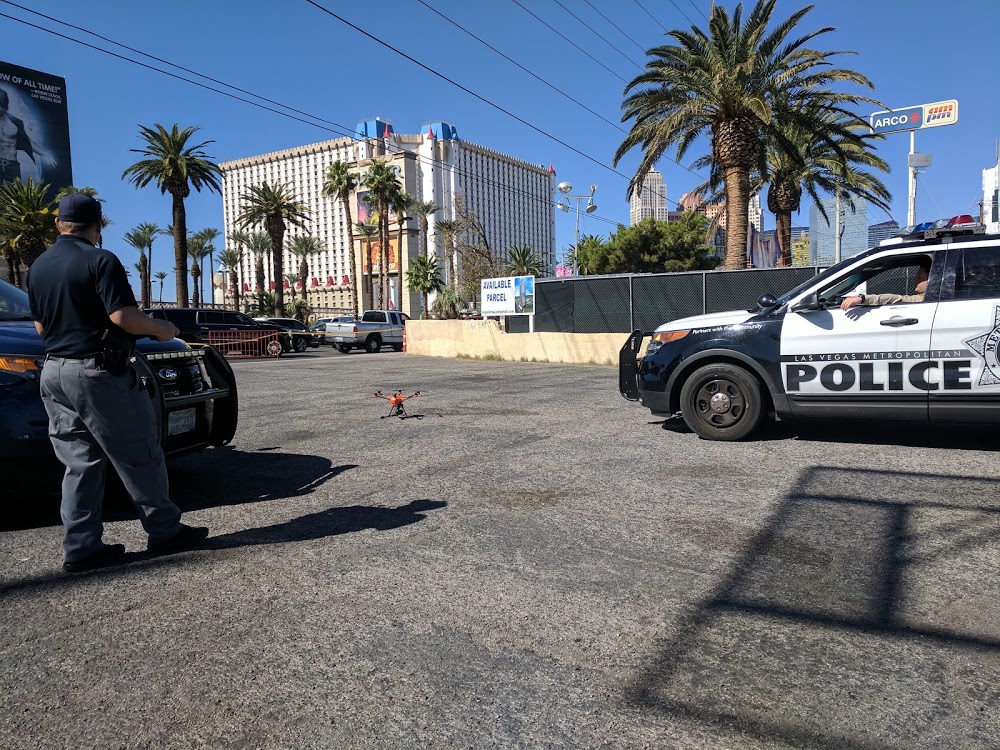 The author has not seen the final results from the orthogrammatic image render. The planned workflow is to render each of the separate areas for consistent GSD, added into a master render for each altitude. Once the flights were complete, memory cards were handed over to the federal agency.

This was very much a team effort. ATC, McCarran Airport, FAA, City of Las Vegas, Department of Public Safety, FBI, local subject matter expert, and other investigative agencies worked within a highly communicative environment to ensure no evidence was compromised, that all personnel were aware of each others activities, data/areas logged for clarity, and flights indicated in written, pictorial, and telemetry formats were shared between teams.

Until October 1, the World Trade Center had been the largest physical crime scene in America with a total area of approximately seven and a half acres. 1 October is nearly three times in size.  Due to persons involved with both scenes, availability of data and cost from the two events may be compared and examined to gain an understanding of technical and operational improvements over the past 17 years. 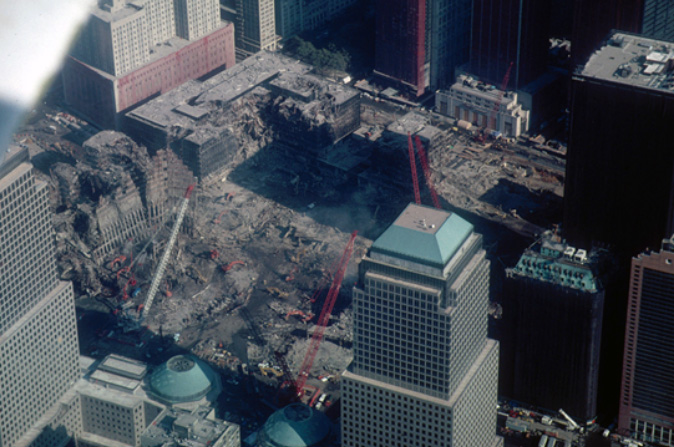 In the last week of September, 2001, a Super Twin Otter with several sensor systems was called up to capture data from the World Trade Center scene.

Flying orbital and grid patterns over the course of five days, significant amounts of data were collected for analysis by multiple agencies. 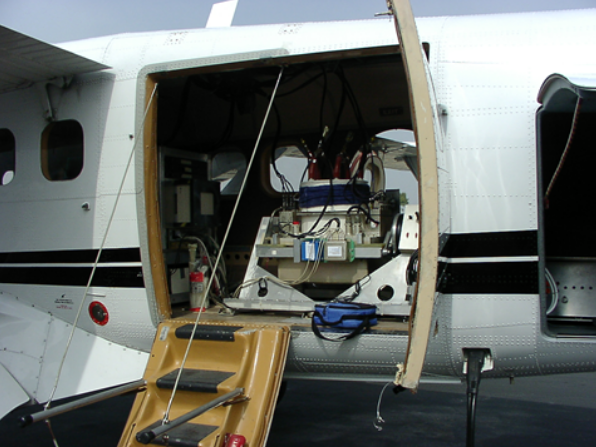 Costs were reported over 1.5M, including fuel, personnel, equipment, and time. 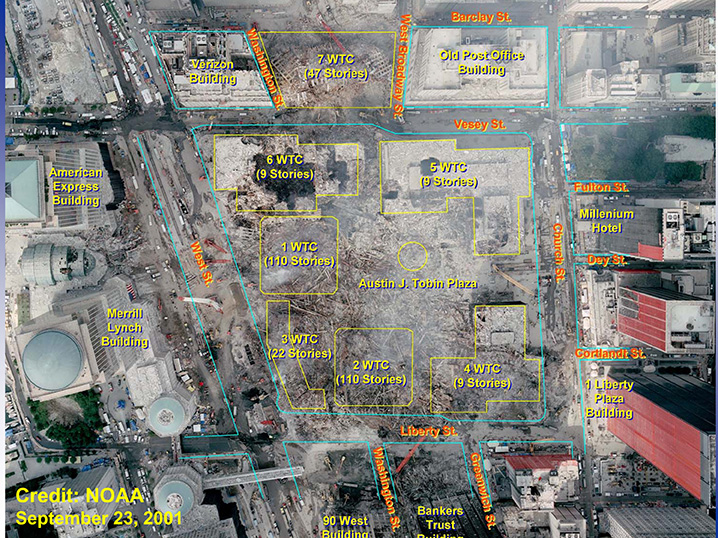 Although the images captured are still classified, data from surrounding, unrelated areas demonstrate the poor quality of image capture. By comparison with modern technology, the images are of limited value, offering little useful data (by comparison). 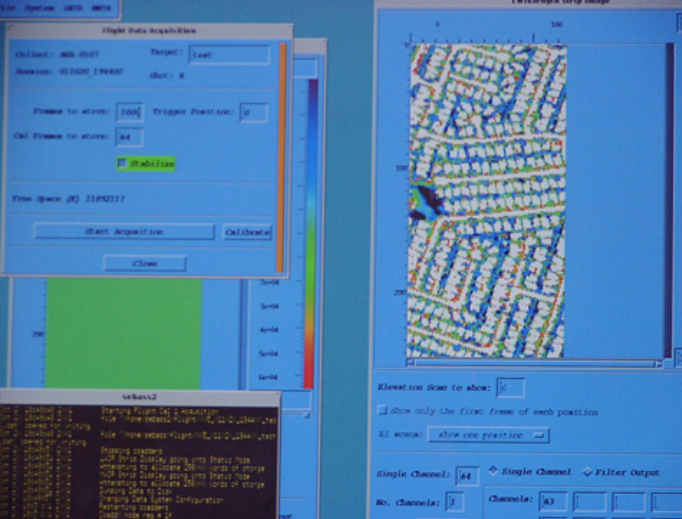 The time, cost, labor, headcount, and quality of data are all areas where UAV have proven their value to law enforcement, and in this case, costing $1.5M vs $15,000 (cost of three aircraft, batteries, and accessories), while providing incalculably greater value through images that may be digitally shared in 2D, 3D form, annotated, analysed simultaneously by multiple agencies and investigators.

The value of sUAS proved itself through rapid access to available airspace, speed of operation, quality of data, cost of operation, ability of continuous flight, noise and traffic impact on the surrounding area and area of investigation, speed to solution, instant verification of data capture and image quality, ability to simultaneously capture multiple areas, and most importantly, safety to all persons involved in the acquisition of data,  processing and investigation of the 1 October scene.

About the Author: Douglas Spotted Eagle

I've been a successful product developer, musician, film/video professional, instructional designer, skydiver, and aviator. Picked up a few pieces of gold, brass, titanium, and tin along the way. This blog is where I spill my guts about how I'm feeling at any given moment, and maybe a blurb or two about what's happening in product, video, skydiving, and aviation worlds.