NOTAMs, Authorizations, and Waivers (O My!)

Recent experiences around the country indicate that there are pilots in the UAS industry that may not fully understand the unique differences between Authorizations, Waivers, and NOTAMs. The point of this article is to express the differences, and bring clarity to the three notifications.

Imagine a public event where multiple UAS pilots will gather to fly in controlled airspace, demonstrating what UAS bring to the general public and business. The event managers designated an “Air Boss,” responsible for safety considerations and airspace authorization.

During the day prior practice time and safety briefing at this event, the safety manager (Airboss) provides a verbal and written briefing during which it is articulated “We’re grateful the local FSDO office gave us permission to fly here, because it’s D Airspace under the Bravo shelf.”

Would this cause your ears to prick up? Or would you fly, accepting that the local FSDO had granted permissions to fly in the controlled airspace? We were curious.

We had not previously concerned ourselves with who was the “AirBoss” or responsible party, as our organizational PPO requires that we request an authorization for any mission in controlled airspace regardless of who is in charge. After all, much like NOTAMs, UOA’s (official FAA notifications known as an Unmanned aircraft Operating Area) can be shared operational space.  In other words, we’d requested a UOA 10 days prior to the event and authorization had been granted for 300’ AGL for the duration of the requested time and area.

Our ears had been pricked, and immediately following the briefing, we wanted to more clearly understand what had been filed and by whom. What we found surprised and concerned our team.

The above image indicates the authorization. Note the specific/defined Lat/lon coordinates, surface to 300’ AGL, and time of operation.  An authorization also includes a trackable reference number to demonstrate who, what, when, and where the Authorization was granted. This IS an AUTHORIZATION.

The above image indicates a NOTAM, a NOTice to AirMen, saying “there will be UAS operating in this area between the times of 1800 on Friday until midnight on Sat.  Note there is no traceable number; other than the NOTAM request itself.  This is NOT an AUTHORIZATION.

Upon approaching the Air Boss (A part 61 pilot), he indicated his understanding the NOTAM is an authorization, and it caused us to wonder how many 107 UAS certificate bearers may be unaware of the differences between waivers, authorizations, and NOTAMs. In this particular instance, at least 20 pilots were under the impression they were authorized to fly in the D airspace per representations of the Air Boss. Unfortunately the Air Boss was unfamiliar with tools such as UASideKick (which we use) or KittyHawk (there are other apps, these happen to be what we use).

Having said this, the Airboss indicated to the FAA representatives that they’d indeed, also filed a UOA, although it wasn’t showing up in any on-line system (and are now expired). 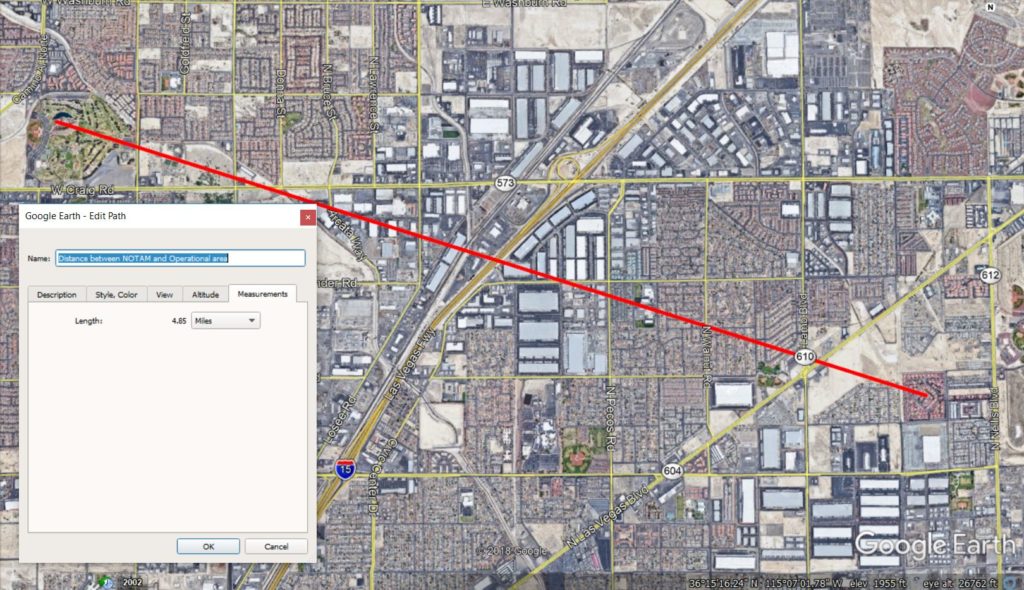 To the best of our knowledge at the time, only one organization was authorized to fly at the event. Additionally, the improperly used NOTAM was nearly 5 miles from the actual area of operations where dozens of UAS pilots were expected to fly under the expected Authorization.

[side note]; the FAA became aware of the concern at the time as they were in attendance. They immediately acted  on the information, took steps to correct any errors and/or misunderstandings, and had conversations with the organization coordinating this elaborate UAS event.  This was a learning opportunity for all involved.

SO WHAT ARE THE DIFFERENCES?

NOTAMS, or NOTice to AirMen, is merely a means of identifying an area where manned pilots should be on the look out for a specific activity whether model rocketry, unmanned flight, airshow, student pilots, ballooning activities etc, are taking place. It’s permissory by no means. Anyone, pilot or not, can file for a NOTAM via the Liedos services. The NTSB refers to NOTAMs as a “pile of mess.”

NOTAMs are not required for any operation, yet exist as a safety precaution that some UAS operations undertake to as part of their SMS (Safety Management System).

Details related to filed NOTAM (Who/Where/How Long are included with the NOTAM filing. This information is kept by the FAA for 30 days prior to it being permanently disposed of.

Authorizations are permissions for specific areas for specified time windows. Essentially, they are one-off permissions. The LAANC system is an ideal example of Authorizations; a pilot wishes to fly a mission in a specific area, during a specific time frame such as say…the Space Needle in Seattle, during sunset. Using tools such as UASideKick, KittyHawk, Skyward, or other LAANC-authorized application, pilots can file a request for an authorization in a gridded area, with altitude specified by the grid location. Flights in zero grid areas area also possible, but require some additional steps. The same can be said of non-LAANC airports.  LAANC offers pilots a great deal of opportunity, yet it’s important to note that a LAANC authorization does not extend into combined activities, such as night flight, flight over persons, etc.

A waiver grants a pilot or an organization the ability to fly in a given area without having to file a request for authorization for each flight. For example, if one needed to repeatedly fly a construction site day to day, week to week, a waiver would usually be the most efficient route for operational consistency.

Waivers may have specific requirements and permissions. Most of our waivers are combined waivers, meaning we have 107.29 permissions included, allowing us to fly in restricted airspace at night with specific requirements. Requirements may vary by area. For example, one of our waivers requires tower notification when we commence and discontinue operations. Most of our waivers require a means of monitoring tower communications/traffic, and being available to the tower on a radio or mobile phone. We generally keep our Icom radios on, with transmit ability disabled (it is a listen-only function). This alerts us in the event of a low flying aircraft, emergency, or other activity in our area.  All of our Bravo waivers require at least one visual observer in addition to the pilot, and night requirements may increase the number of visual observers.  We use one Icom, while every visual observer is on an FMR radio for team communications. Either the RPIC or primary visual observer monitors the tower chatter.  Although authorizations do not require a radio (A mobile phone will suffice), we also use ground/air radios for Authorized missions.

Given the event was held less than a mile from an airport and lay directly beneath departure from that airport, it was critical that the airport traffic be monitored whether by radio, mobile app, or other means, our team found ourselves monitoring traffic and passing that information along to other pilots at the event. The Airboss and crew of the event wore fully enclosed, noise-canceling headsets, so our participation went beyond the event using our Authorization, it also included tapping pilots on the shoulder to let them know that a helicopter had arrived in the area (Note to fledgling sUAS pilots; fully enclosed headsets are not recommended while flying. Someone needs to be able to hear approaching aircraft per 107.37 so that they might avoid).

Looking sharp is great for the public eye, but aviation is like an iceberg; what shows above the surface should be a tight, clean operation. What happens beneath the surface is a dedicated process of decisions, applications, standards, risk mitigation and management, amongst other things.  Wearing noise-canceling headsets and not understanding the differences between NOTAMs, Authorizations, and Waivers would not. One of the greatest components of being a professional is knowing, observing, and executing missions within the regulations, while demonstrating best practices and exceeding safety minimums at all opportunities.

The first priority in all aviation circumstances is to understand mission airspace, requirements within that airspace, our aircraft, and risk mitigation process from top to bottom. With literally dozens of tools at our disposal (both no-cost and paid) to ensure pilots understand airspace and potential traffic within that airspace, the situation above should not ever have occurred.  It’s great to combine a NOTAM with a Waiver and/or an Authorization, but a NOTAM cannot substitute for a Waiver nor Authorization.

It was fortuitous that the FAA representatives were on-site to answer questions, alleviate any issues that arose, and generally support and ensure the event for safety.  The ASI’s we have opportunity to interface are incredible resources to those new and learning within the UAS industry.

Tell us what YOU think. How would you and your crew have managed this scenario?

About the Author: admin